I’ve been taking thousands of images of Istanbul. These images are of my walks, starting with going to Findikli and then onto Istiklal Caddesi.

People, including myself, are overwhelmed with the sheer traffic of people walking down this pedestrian street. Walls of people are the daily norm. I have only seen it quiet once – one morning during the first day of Bayram at the end of last year. It was an almost eerie feeling after getting used to the presence of life always being there.

I began at Tünel and braved the massive crowds. I walked super super slowly down Istiklal Cad. holding my Canon camera at belly-button level in the spitting rain. The walk was incredible. Despite the thousands of people walking in close proximity to one another, everyone moved out of my way. Each move created space for both me and the person passing me by. It seemed almost as if it was planned, a choreographed performance, or a dance. The experience was incredible! I didn’t expect the crowds parting and reconnecting to make way for me and my super slow moves. There was a constant awareness of everyone, a constant manoeuvre so as not to bump into one another, a consideration for each other. I was expecting the opposite.

The walk was a long deliberately slow take of the life blood of Istiklal, the physical street and its people, I’ll never forget it!

Over an hour later with hunched shoulders and a sore back I gave up, bought an umbrella and decided to start at the Taksim end another day.

After contemplating how to combine the Istiklal stop-motion images I created with the GIF walk, a decision was made to focus solely on one. My friend SuperNova, with fresh eyes, saw the strength of one over the other. After much discussion, the GIF walking animation would be put on hold and more endurance performances were ahead of me. 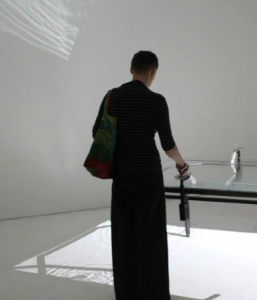 This blog contains my images, words, musings and the occasional random thoughts as well. It’s where I will be posting about the process of my work and projects.
NOW: I am asking for people to share their walk with me for my latest project – Share Your Walk

More of my work here:
http://anitabacic.com

More about this blog >>